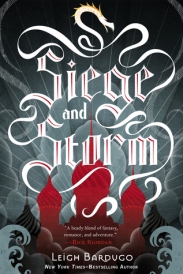 Siege and Storm is the second volume in Leigh Bardugo’s Grisha Trilogy. The novel picks up right where Shadow and Bone left off. Alina and Mal are on the run on the True Sea trying to figure out their next move. Unfortunately, “like calls to like.” Alina and Mal are soon captured by the Darkling and his Grisha and forced on the Darkling’s boat. The Darkling has demanded that Mal track the next of Morozova’s amplifiers, Rusalye the ancient ice dragon, to further take control of Aline and magnify her power dual fold. When things seems dire, Alina and Mal are saved by an unlikely ally, a privateer with dubious morals named Stormhond, and his Shu Han crew, Tamar and Tolya. On Sturmhond’s ship, Mal continues to track Rusalye. Determined to save Ravka from the Darkling and his desire to increase and control the Shadow Fold, Alina kills the ancient Rusalye and takes the power for her own. She now has the collar and a new fetter.

After landing, the privateer reveals his true colors, he is the youngest Prince of Ravka. His identity revealed they make their way to the Little Palace, a full circle for Alina, and plan their attack on the Darkling. Unfortunately, Alina can’t stay away from the Darkling for long. She begins to see him in her dreams and waking nightmares, lurking around every corner. The collar at her throat connecting the two.

Much of this second novel is spent trying to build up an army to fight the Darkling, as well as, Alina’s growing need to find the third mysterious amplifier of Morozova to increase her power. Alina is no longer the confused girl of the first novel, unaccustomed to her new power and trying to find her place in the Grisha world. She is now owning her powers to the point of total consumption. She knows she is the one in control and begins to act much more like a leader than a follower. She is controlling her army of Grisha and sets the rules and standards for them.

For me, some of this novel did drag a bit. Though I thought overall it was much better in ways than the first. The second novel continues to follow Alina and you see character growth from every character. There is a lot more at stake in the second novel now that Alina knows where she fits into the grand scheme of things. The ending of this novel was my absolute favorite. I loved the imagery of the fallen idol projecting her own rebirth. There will be much more loss, pain, and glory to come for Alina in Ruin and Rising.

Stay tuned for the final novel in the Grisha Trilogy. Happy Reading!